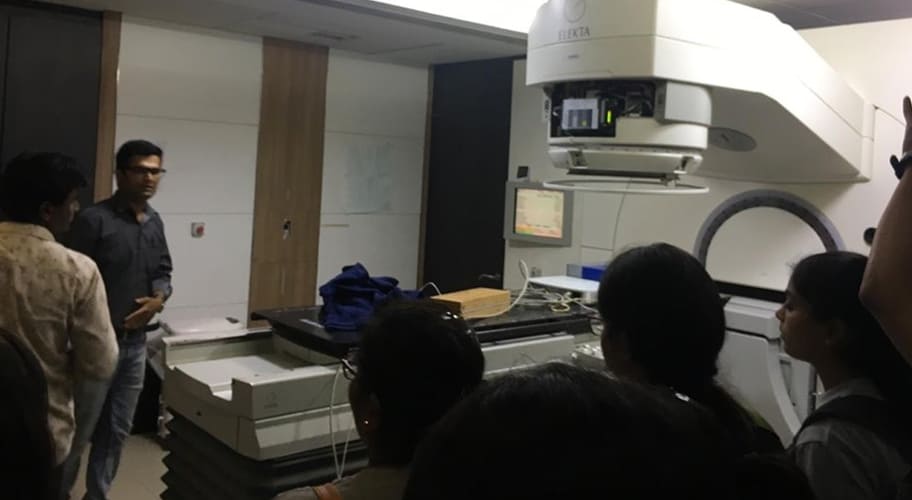 A motto, the team at Kolhapur Cancer Centre staunchly believes in. KCC was established in 2003 under the proficient and dedicated young surgeon Dr Suraj Pawar, with the vision of building a comprehensive Cancer Care Centre providing exemplary Cancer treatment and services.

After receiving his training from Tata Memorial Hospital, Mumbai and Memorial Sloan Kettering Cancer Centre, USA, Dr Pawar followed his inner urge to practice in a region with a rural backdrop and serve the most needy cancer patients, for whom treatment was neither affordable nor accessible.

Today Kolhapur Cancer Centre is the leading and the most comprehensive Cancer Centre in South-West Maharashtra. Along with Kolhapur, patients from Satara, Karad, Sangli, Miraj, Konkan and interior parts of Maharashtra, Goa & North Karnataka have benefitted from the treatment services.

As a part of an initiative by Switch India, 20 students from RCSM GMC Kolhapur, from Second and Third year of MBBS visited the centre on 15 th June 2019.

The first part of the visit was an intriguing lecture by the Dr Pawar himself. He discussed commonly observed risk factor like: Tobacco consumption, Virus, Heredity and Age along with the importance of early diagnosis and acting on suspicion as medical professionals.

Knowing the warning signs of Cancer was one of our most important take home messages:

Dr Pawar stressed on the trend of increasing tobacco associated, more aggressive cancers in a younger age group even with a much shorter period of exposure (as short as 6 months).

We were shown various interesting cases along with certain surgeries performed at the centre.

One such important milestone and proud moment for KCC was for the development of an innovative technique for esophageal cancer for the first time in the world, by the name: Thoracoscopic Esophagectomy in Dorsolateral/Semi-prone Position :

This was accepted worldwide and is now approved by the American Board of Surgeons as a part of their teaching curriculum.

With the use of newer and minimally invasive Oncosurgery( including advanced laproscopy and Thoracoscopic Surgeries) that the centre specialises in, they have now shifted the focus from mere survival to organ/limb preservation and giving proper cosmetic benefits and functional capability to the patients.

80-90% of these surgeries are covered under various schemes like Rajeev Gandhi Jeevandayi Arogya Yojana, ESIC, MPKAY and The State Government and Semi- Government agencies for cashless treatment and reimbursement of Cancer Treatment, making it highly affordable.

The second part of the visit was a tour of the Kolhapur Cancer Centre, we covered all the steps of Radiation Therapy planning, Diagnosis and Cancer screening.

The visit provided us with great insight into Oncology as a branch; everyone at the centre was very warm and hospitable.

Dr Pawar’s dedication and belief was incredibly motivating, he made us realise that even with a deadly disease like cancer, there can still be a light at the end of the tunnel as long as we are willing to fight for it!

I’d like to thank Switch India for making this memorable visit a possibility and hope to be a part of many such enriching endeavours in the future.